We begin with a welcome from Ria, at the British Library, and details of the Georgians exhibition currently taking place here: Georgians Revealed: Life, Style and the Making of Modern Britain.

She hands over to Michael Riley who explains that the theme of the conference is Changing School History and that there are 130 delegates here today, including 40 trainee teachers and a number of primary colleagues preparing to teach the new NC. He talks about the importance of the 18th century, and the big changes that took place in that century, and how it’s quite exciting that its being taught again, as a preface to Alison Kitson’s keynote on this topic. Having been reading about the growth of the British Empire, particularly in the 17th and 19th century, this is very timely because I have been wondering what fits into the gap.

Alison’s title is Manners, Morality and the Middling Sort: why it’s valuable AND fun to teach about the 18th century in schools.

1. Why study the eighteenth century?
We begin with a quote from Amanda Vickery, considering the features of the 18th century that she is trying to express. 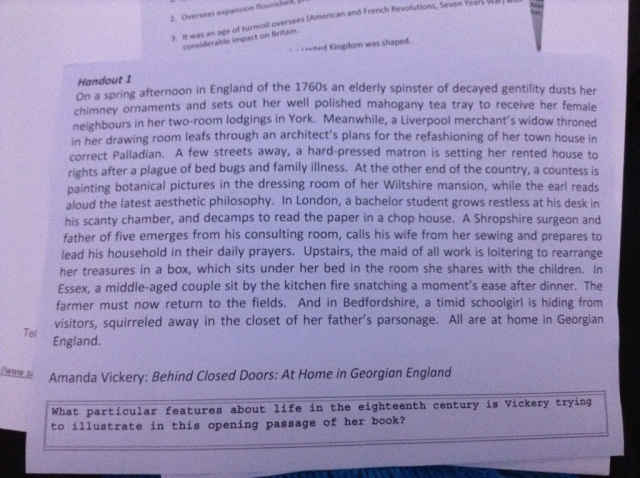 When was the 18th century? Vickery expresses it as the period between the Glorious Revolution to the Great Reform Act. Others end it in 1801 or 1789 with the French Revolution. The new NC splits it in half, still. What to call it – the Georgians? The Hanoverians? The Century of Taste? More importantly, is it modern or early modern? Alison says she thinks it’s on the cusp of modernity. Is it taught in schools? Aspects, yes – Bolton and Watt, Wilberforce, canals and turnpikes…. But not as a whole.

Alison makes a good case for why we should teach the 18th century:

Personally, other than its place in the growth of the British Empire, I’m interested in the impact of revolutions abroad. What was Britain like for John Bull before the authorities lived in terror of being overthrown? Was it the same? I tend to think of the 19th century as rife with perceived sedition and excessive reaction to political agitation, and now I wonder whether that was the same in the 18th century.

We consider themes from Vickery – leisure, change and continuity etc

Nuggets! We are reminded of Jamie Byrom’s advice to look in the footnotes. Alison’s 18th century nugget is their obsession with roast beef. A song, The Roast Beef of Old England, was written at this time and is still played in army mess halls today.

3. Wrestling with the enquiry
We consider possible questions. 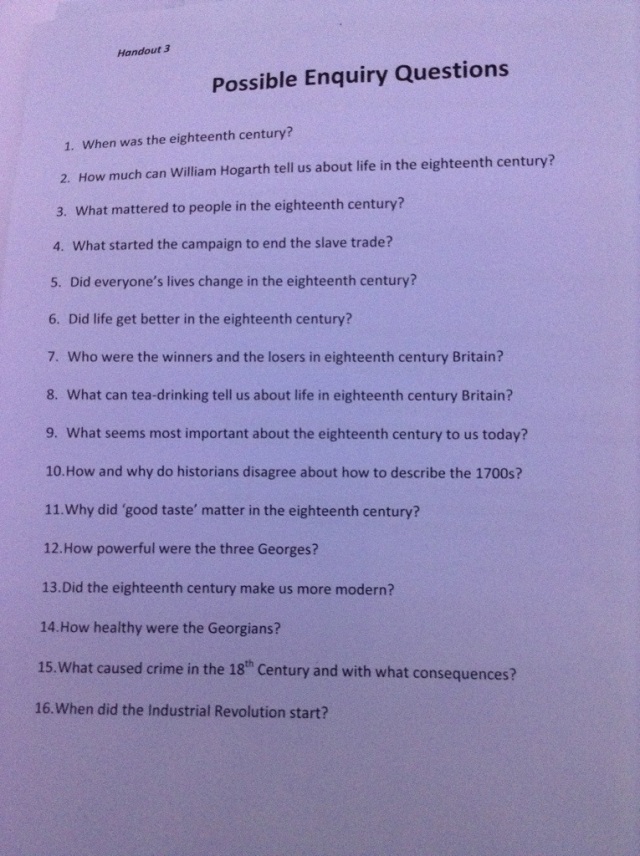 I like number 2 and think there would be a lot one could use with this; it would also be excellent training for students to prepare for that difficult “How useful is this source?” GCSE question in really glorious detail. I also like number 8 because it ties together several things – the acquisition of India and Hong Kong for the Empire, and the Great Reform Act (I serve Earl Grey when I teach this lesson). Ian Dawson suggests adjusting 14 to read “How sick were the Georgians?”

Alison has handily picked tea drinking as her focus for today.

This is essentially a change and continuity focus. 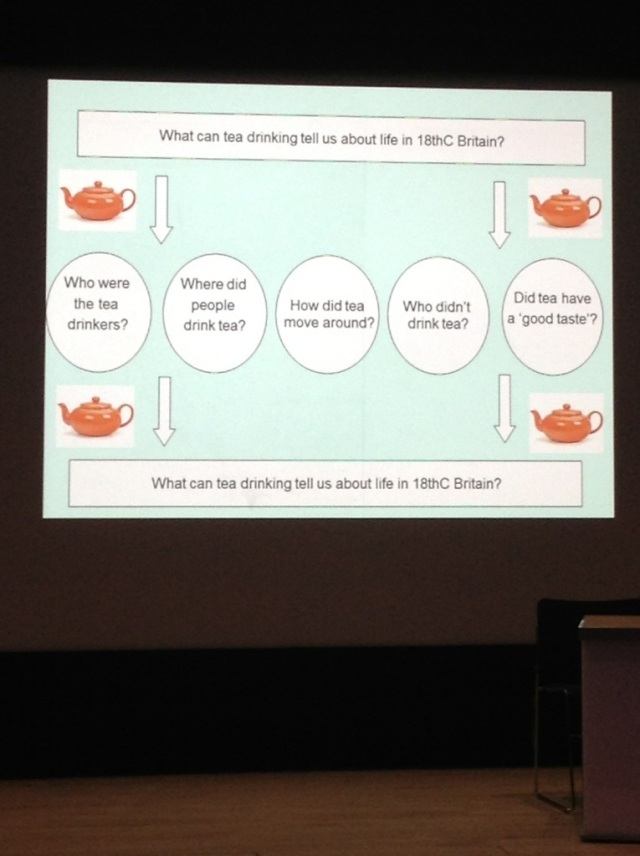 Who? We consider a painting: An English Family at Tea. Catherine Briganza (no idea of the spelling or, indeed, accuracy of that name) introduced tea to Britain in the 17th century, mainly for the wealthy. By the 18th century the middle classes were growing and they would often drink tea and did go in for the taking tea ritual as a social construct, copying the paper classes.

The Middling Sort were definitely on the rise, thanks to huge wealth growth among financiers and merchants – the Bank of England was founded, food prices fell… A tripartite class system was developing and the lower classes didn’t drink tea. Women had a role within this and this gave them some power because most of that, for women, derived from social networking. Middle class women had a few more opportunities, in jobs as diverse as plumbing and cook book writing. There was some equality within marriage but attitudes were still very sexist.

Where? The rapid growth of towns – the population of London doubles in this century, for example – brought new buildings and infrastructure, which made them pleasant places to live. To begin with tea leaves were not sold privately and so tea could only be drunk in public. We look at a Cruikshank painting of a coffee house (comparing Cruikshank with Hogarth sounds like something my year 8s would enjoy). As soon as the tea leaves became available at home the idea of “the visit” becomes important. We look at a picture of a morning tea visit which Alison got from the British Museum high-quality image service, which she recommends highly. 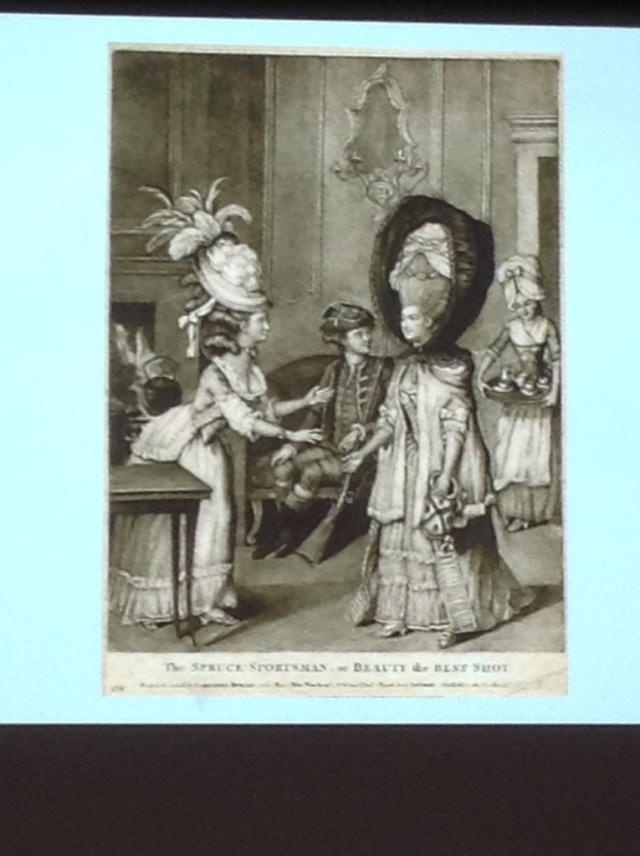 Love the hats! Home visiting made one’s taste in decorating, clothing and possessions really important, as well as owning one’s own home. The tea ritual gave people an opportunity to show off.

How did it get here? Clear links available here with the British Empire growth, as well as the development of transportation in England. Roads were improved which had an enormous impact on consumerism and trade. A canal system was developed as well.

Who didn’t drink tea? We look at Hogarth’s Gin Lane. Tea, and sugar, were very expensive and so people without money didn’t drink it. Although the Middling Sort were becoming much wealthier thanks to all the trade, the wealth gap was growing because the lower classes didn’t share any of this new wealth – a phenomenon which led to huge growth in memberships of friendly societies and over 300 strikes. Gin was cheaper than tea and this led to problems of alcoholism. We also look at Beer Street, and a slave trade abolitionist token. Slaves were involved with tea at a distance and slavery underpinned the increase in wealth, but did not drink tea.

Tea taste? Alison explains again that taste among the Georgians was paramount. There was a lot of paraphernalia surrounding the tea ritual – china, tea pot, kettles, tea tables…

This was great! Totally enthused.

This entry was posted in shp25. Bookmark the permalink.