Ian Dawson and Richard McFahn giving us some advice for planning our new course based on the new NC. 75 minutes of gallop!

We start with the Corn Laws, which have disappeared from the draft NC (or “the February document”). We have a little role play, beginning with considering how important bread was in the 19th century. Ian likens it to electricity today and I half remember a statistic I heard, somewhere, that suggested 80% of what British people consumed was grain based at this time – bread, beer etc. French wheat is half the price of British wheat, but buying it will have a very negative impact on employment of farm labourers, who make up at least half the population at this time. British farmers voted, so British politicians made the Corn Laws, putting the price of French wheat up higher than British. Food prices went up, and in times of bad harvest this had a terrible impact on normal people, who felt angry, resentful, bitter – and hungry. But, without the vote, nothing could change – and here is the crux of it. It’s worth teaching about the Corn Laws as a lead in to explaining the emphasis put on getting the vote at this time: it was about feeding the family. We consider the impact of the various reform acts with people standing up to show increase in voters – from 1/25 in 1830 to 1.5/25 in 1832 to 2.5/25 in 1866 and 8/25 by 1884. The pace of change was extremely slow, and people were willing to fight and to die for it, because it boils down to needing to feed the family.

Don’t shy away from topics like political reform which you might consider difficult to teach. If it’s historically significant, don’t back off, but keep trying until you find the way in. If students care about the topic, eg by explaining that it was about food, they will be more engaged with things like the reform acts.

Richard McFahn now talks about longer term considerations. We discuss possible themes for reorganising the curriculum, and he suggests ideas and beliefs, power, people’s lives and warfare and empire. Like this idea because it could be the framework on which we tie each of the units we teach across key stage three and allow students to make links between them. Richard points out that we need to think about how we are going to ensure our students get better at historical thinking, or planning for progression in their conceptual understanding. Richard shares some work with Hants history teachers on progression in interpretation: 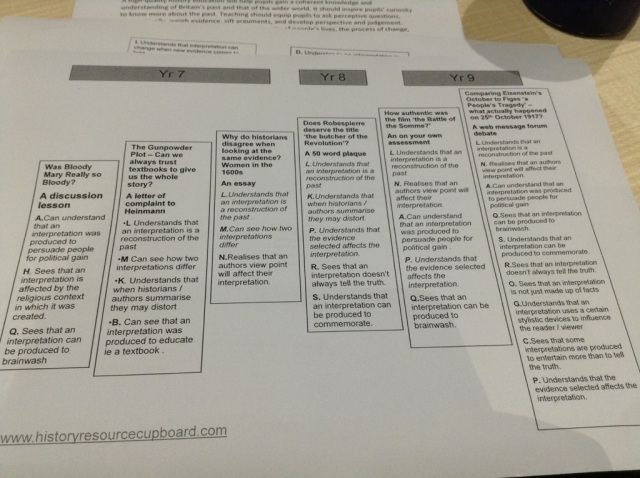 We consider knowledge takeaways from key stage three studies, thinking about the key things that we want students to take away with them to help them think about the patterns that emerge from individual events. This is vital and can also help to take the pressure off history teachers to teach certain events in too much detail. Richard shares some documents suggesting content from each time period that might fit into the themes that he has suggested.

Ian comes back with heaven, hell and purgatory. He reminds us that in the 1300s people saw purgatory as a very real place. He references Helen Castor’s recent series on BBC4 which covered birth, marriage and death. We look at the various ways that people could shorten their time in purgatory and consider what various people might have done based on their experiences. A lot of townspeople left money for civic improvements – Dick Whittington, for example, bequeathed the money for a 200 seater toilet to be built in London after his death. The focus is on getting across the idea that most people would get to heaven but the time it took to get there varied depending on wealth, class, devoutness etc. Every Rose Has Its Thorn, after all. What impact did this have on society – were they more selfish, or more caring and sharing? This sort of role play helps students to care more about the topics.

Richard’s back to remind us of the importance of sticking to our principals as history teachers. He goes back over the SHP principals and invites us to consider the rationale of our course planning. This will vary from context to context. We discuss a variety of statements about planning the curriculum to help us come up with our rationale for doing this. SHP advocates an enquiry based approach, only partly because that is the advice from Michael Madison, History HMI. Richard goes through the stages:
1. Create curiosity. Perhaps get students to think about being on an archaeological dig and what they might want to ask about their findings (use a picture to show the dig) dripping in bits of background knowledge to help them consider what’s happening. Students then try to come up with their own enquiry question and this leads to…
2. Suggest a hypothesis. In this case we consider why 50,000 skeletons were found buried under Charterhouse Square. The first suggestion is Plague, though they were buried in neat rows so I’m not sure about this. Richard suggests a line of certainty, asking students to place themselves somewhere along it to show how sure they are. We look at some clues which indicate it was indeed the Black Death, but that doesn’t explain why there are so many of them. Tis generates another question and then the cycle begins again.

Ian reminds us that in history, it’s ok the be uncertain, but this is not a natural state for children so it needs to be reinforced. Ian then talks us through doing an overview of 1547-1700. Catholics on the left, Puritans on the right, “normal” people in the middle. What do they all fear? Purgatory again! He suggests a living happiness graph where students react to changes that took place in the church over the time period. There’d be very little information, because the idea is to give an overview. It’s not necessarily achievable to expect children, at the age of 12, to take away a great deal of detail about the religious reforms in the 16th century.

This entry was posted in shp25. Bookmark the permalink.