Jamie Byrom talks first about the principles of planning. He cites: teaching with a purpose (why study it?), engaging with subject knowledge, wrestling with the enquiry and exploiting the particular. We have a quick chat about the causes of WW1 and what Britain was actually fighting for, to demo the first point. Then, he breaks subject knowledge down into stuff, and issues, and nuggets. Look at exhibitions, documentaries, podcasts, book reviews, as well as books. He recommends The Sleepwalkers by Christopher Clark as a good background to WW1, and a recording of soldier Edward Dwyer. 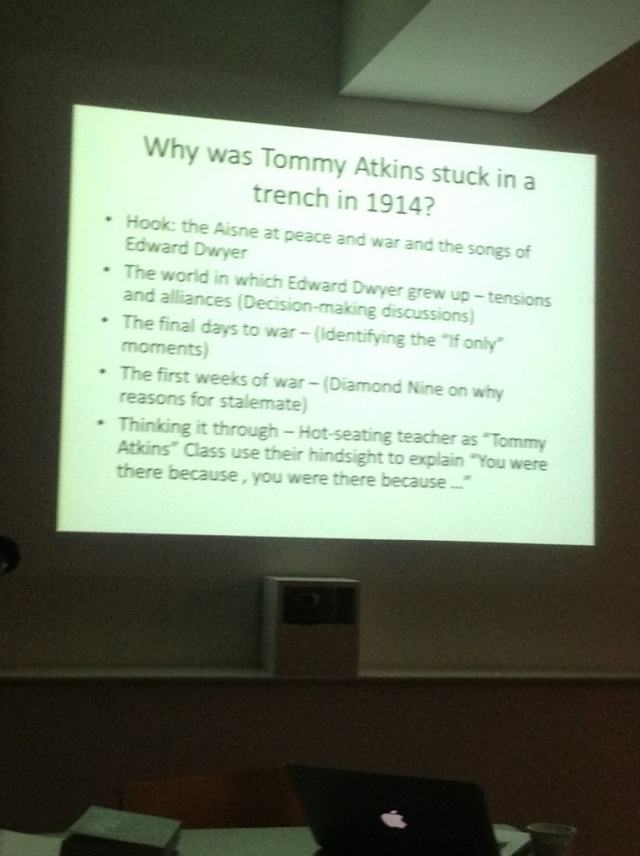 He suggests some possible enquiries to go with WW1 and ruminates on how best to exploit the power of the particular with a picture of the Aisne valley as it looks today.

Robert Massey from BGS on co-construction. He’s trialling it with a class: they have joint responsibility for the topics of lessons and home works, based on the work of Tom Sherrington, and the positives and pitfalls of this. His biggest concern is measuring progress in co-constructed lessons, or more importantly, learning.

Sophie Sullivan from Norton Hill on the Great Depression game. The start of the related GCSE unit was a bit dry, so she tweaked a game to cover the content in an engaging way, whilst encouraging them to think about how Hoover got it wrong and lost the election in 1932. Students take it in turns to play the president or his advisers. They’re given the content and a list of choices, all of which are Hoover’s actions, and asked to discuss what they think he did. Then they are given the real story, with the impact of it. They score on an American flag handout. The resources for the game are on the Bristol Schools History Forum website.

Will Lowndes from Taunton now, talking about local history. He says the local history down there is quite dull, with flashes of interest: the local museum provided some local context and artefacts to get the students engaged with their local story.

David Rawlings from Chepstow School next talking about Flipped Learning. The idea behind it is that content is done at home and skills are developed at school, essentially. Dave did some action research on this. It made use of student technology and made homework more engaging, as well as allowing more time in school focusing on higher order thinking skills. He used Edmodo and YouTube, and set up a blog; he also made some of his own videos, of which students watched one a week and then had to use that information to make presentations in class. Qualitative results look good: student voice showed that most were more engaged and better prepared, while many student made a whole level of progress on the assessment, with more than half making two sub levels.

Marie Sellars from the Church Conservation Trust next, sharing some ideas for using churches as learning experiences for pupils studying history. There are 114 CCT churches in the west, including one built by prisoners of war – French and American.

After the break we come back to Rich talking about teaching Christmas history, particularly Christmas during WW2 and the lesson he taught on this last year, including an austerity Christmas party.

Phil Arkinstall from Oldfield now talking about archaeology and digging deep for the truth. He wanted his students to engage with evidence and be able to question the past. He filled a box with sand and added a toy skeleton and laminates of artefacts around it for students to excavate. Students go through the box and interrogate the sources, recording what they have in there, why they think it is there and what they were for. They finish by writing an archaeological report.

Next, Michael Gorely from Heritage Schools Bristol, recruiting for the English Heritage Education partnership. Grants are available for spending on history projects and resources in school.

Paula Lobo now talking about historical interpretations and Gromits. She said a history teacher friend said, “It’s a bit Mr Men, isn’t it?!” – love that that’s become a thing now, well done Russell Tarr. She talks about the different Gromits and how they can be used to consider the purpose of the sources. She got students to think about who should be in the kennel of Bristol history Gromits. How did they choose the significant individuals? 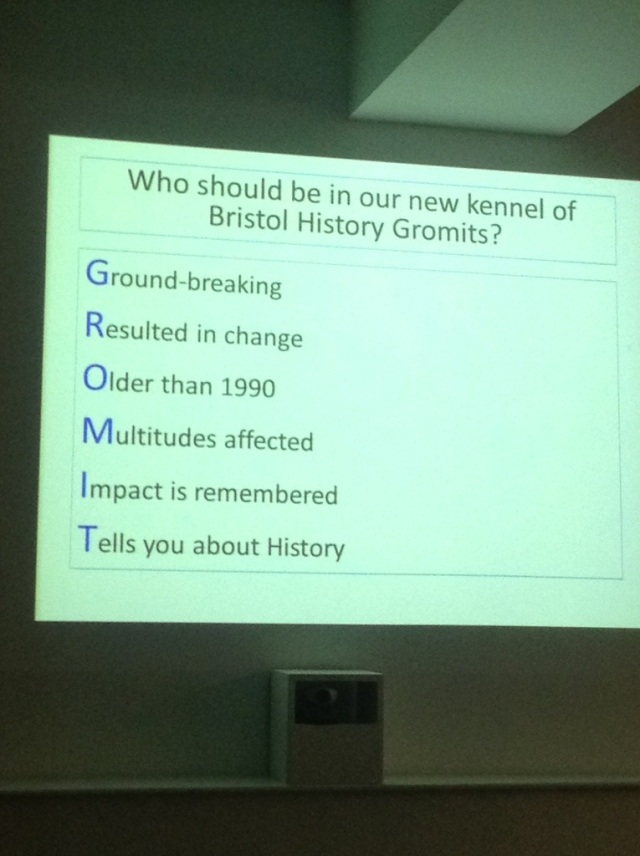 Finally Paula thought about Gromits as interpretation: where was the Brunel Gromit? How would it look different if someone else had designed it?

Mary Feerick now talking about a Bristol post-16 conference to help students to revise A-level history. Lectures are being offered from professors alongside a panel discussion and advice from student ambassadors. Please fill in the info forms for her!

Kathryn Lewis now talking about Beacon Schools for Holocaust education. It aims to develop networks of schools who want to strengthen and improve their teaching of the Holocaust. Current Bacon schools, St Bede’s and Backwell, offer free CPD supported by the IOE.

Finally, Helen Marsh from Cotham about farmyard animals to teach content. She is a proud Mr Man teacher!

To begin with, year 8 students built before and enter enclosure farms. Year 11 built a farm to use as a propaganda film for collectivisation in Russia. Year 12 built farms to display the Agrarian Reforms.

This entry was posted in teachmeet. Bookmark the permalink.