Google Teacher Academy (already nearly a year ago) was an inspiring and full on-day, but the thing that stuck with me strongest was using Google Maps in the classroom.

I’d been interested in mapping history since I read Mary Woolley’s article in issue 116 of Teaching History, which was all about using conceptions of place to help revise American West.

The good things about this:
1. Engaging
2. Information rich
3. Efficient

With this success under my belt, I started to think about how I could use the maps to support enquiry at key stage three.

I started with using a map to DESCRIBE events.

This is good “storybook” history. It received positive feedback from the class. They retained a lot of the information. I think it would work well as a homework task.

After this I moved on to something a bit higher level, looking at analysing the English Civil War through the battles that took place. 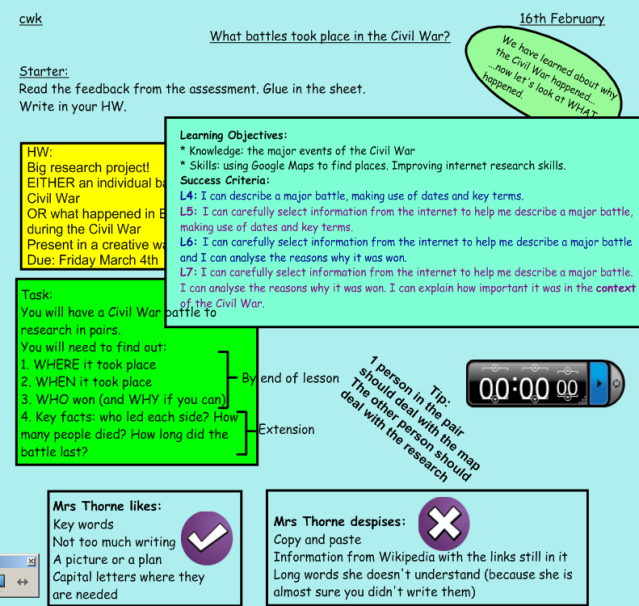 View The English Civil War, by 8-7

View The English Civil War, by 8-4

Health warnings: Carefully consider the issues caused by letting all students log in to the same account.

Next steps: use the map to construct a timeline and try to pick out the turning point in the war. Use the map to analyse where in the country the key supporters of the King/Parliament were.

Bearing in mind the student feedback, I used a very similar exercise with the same year 8 class when we were looking at the British Empire, but this time I also tried to incorporate some new technologies. 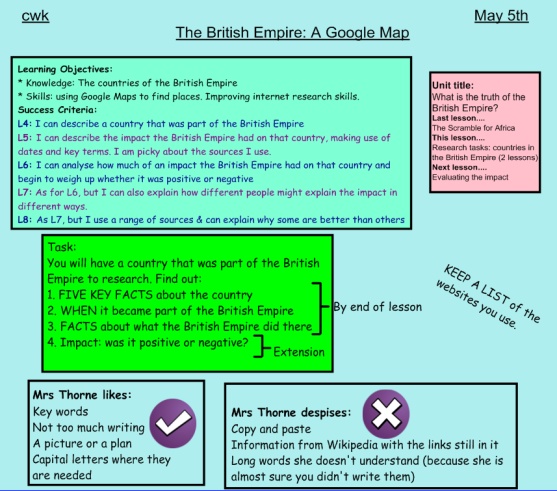 View The British Empire by 8-4

Embedding video is not difficult and adds a little something extra to the whole thing. It also means students can avoid doing the writing if they really struggle with it.

Here’s a map I made of the ski trips we’ve done, to demonstrate embedding video:

This entry was posted in GoogleMaps. Bookmark the permalink.