Jim Carroll on interpretations at y13. His work is based on the NEA, which requires students to do independent research of at least 5 academic historians’ arguments, explaining why they reached different interps and their relative persuasiveness. Jim’s questions focus on Nazi popularity and Oliver Cromwell; students will choose one, depending on the rest of their A-level.

Jim doesn’t agree that disciplinary knowledge and skills are the same thing, and language matters here because it shapes how we view certain concepts.

Substantive knowledge covers knowledge of the sub-domain, eg specific dates, along with substantive concepts like state and empire. Meanwhile, disciplinary knowledge includes how info is structured into historical knowledge, along with the method of historical enquiry.

To exemplify this, we look at a reading from Kershaw. We discuss what knowledge he has drawn on to be able to explain why historians have interpreted the Nazi regime as they have: political context of the post-war era; the process of writing history, eg the opening up of archives/availability of new evidence; the effect of collective memory, which is uniquely pronounced in the study of the Nazis, where there was a kind of collective amnesia. Then what makes the Nazis unique: it is politically charged – there’s intrinsic moral outrage and a tacit idea that writing this history should be part of the way we seek to prevent it from repeating.

(Reminds me of a sixth former who wanted to start A-level history in February of y12 because he studied other essay based subjects and would therefore not be disadvantaged by missing the first six months of the course. Imagine my face.)

Two more that I missed.

Rather than stick with the exam board guidance, Jim decided instead to engage with previous history teacher curriculum theorisation, history education researchers and academic scholarship, especially overviews of Nazi historiography.

Once students have spent some time looking at some scholarship on the Nazis,

Interesting point that students struggle to understand the idea that historians set their own questions, which will inevitably shape the direction of their research.

Historians make choices that go on to affect how they interpret a point of history. Once they returned from the summer holidays, they had a good idea of 3 historians to focus on, which was followed up by a series of lessons on the time period in which the interpretations were written.

Students are given some background into the events of 1945-now that provides background to their interpretations, in the form of 5 chunks, and complete a diagram to show how interpretations of the topic might have changed over time. 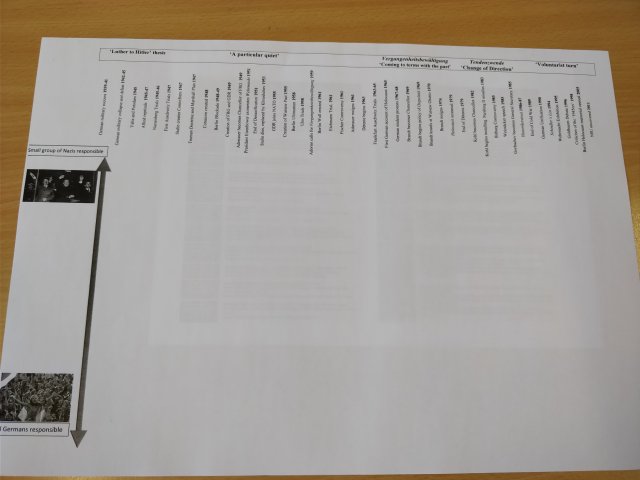 We look at some examples from prior students, considering how they have looked at both the context of the historian and the methodological choices the historian has made.

Don’t feel like I have blogged this session satisfactorily…too busy thinking about it! Thanks Jim.

This entry was posted in wlfs. Bookmark the permalink.