This plenary, with Denis Shemilt and Frances Blow, links in with the workshop I went to this afternoon.

Frances begins by defining big history. The study of human kind through time and space from the first modern humans to the present, presenting the past as an unfinished story that runs into the present and the future. It’s not world history, or the history of the universe. It’s large scale, low resolution, and an open-ended picture of history – but not a replacement for small-resolution topics. Big history should be nested with topics and theme based histories to help with building up a picture of the past. It will enable students to evaluate and construct their own frameworks of the past, without offering a master narrative.

Denis picks up by explaining that this concept has been around for a long time, but it has often served religious/political agendas. There is a strong academic case for considering Big History: 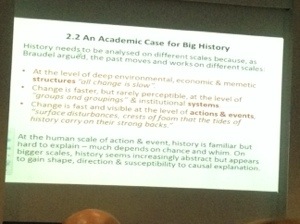 To understand the past properly, you have to keep on changing scale: like on Google Maps, you can zoom in and out to understand better how something it placed within its context.

Frances comes back to explain some issues revealed through the study of bigger history so far: Medicine through time was diminished to a series of topics with little focus on patterns of development; but revisions of the material and beginning with a big framework on which to pin later knowledge helped to address this. Now feel vindicated in spending 3 or 4 lessons on the overview at the start of the Crime and Punishment course.

KS3 however presented a different challenge, being the whole ability range and not a self-selected bunch of (probably) interested students. In an experiment at Ripon Grammar School, students studied the usual range of topics at ks3, but at the end of y9 students would attempt to make links across the entire SoW by graphing individual freedom vs centralised power. Most found this extremely difficult, which led to the conclusion that it doesn’t work to do the patterning after the study.

This led into the Magna Carta experiment at Benton Park. Students learned about the Magna Carta and then placed it by contextualising within Anglo-Saxon England, and then continued after King John by showing how it was important afterwards, and how its importance grew over time. I quite like this idea because it is quite close to what I teach for the democracy unit in Y9 I blogged about earlier this year. The experiment had positive outcomes, but students still struggled to link it with their other learning. Frances uses an example of a student who knew the Magna Carta story but thought it completely unconnected with the Norman conquest.

Denis makes some suggestions about what the big history curriculum might look like. A big framework, followed by a depth study, then back to adjust the framework based on that learning….and so on. After three years the big picture will be much more detailed thanks to regular scale-switching. Denis suggests that it offers the optimum solution to “the content problem” and encourage scale switching, decreasing fragmentation of knowledge. This will also provide them with a framework on which to hang future, post-school historical learning and help them to take the long view when making decisions.

This entry was posted in shp14. Bookmark the permalink.