I have been looking forward to hearing Sarah speak about the teenage brain ever since hearing her at TLAB in March: even though I think much of what she says will be a repeat, I do think I bears repeating. It may mean this blog post is very short though.

Adolescent brains have a very strong awareness of self, especially social self, and are much more likely to take risks. Why is peer influence so strong at this time? Social exclusion has a negative impact on mood and anxiety, even more so than in adults. There is a big drive to fit in with your peers during adolescence, more so than in adulthood. This means that being ostracised by the social group is a bigger threat than, say, smoking or speeding.

Sarah then goes on to talk about the development of brain matter from the age of 4 to 21. Younger than 4 is very difficult because they won’t keep still in the scanner! Grey matter the the prefrontal cortex peaks in adolescence and then begins to decline: that’s not a bad thing, but a very important neuro developmental process. The number of neurons changes very little between birth and adulthood; the most dramatic change to them is in huge number of synapses that links them. To begin with the brain hugely over produces synapses, and these are then pruned away, depending on the environment the child is in. This is vital information for teaching, because teachers are part of the moulding and shaping of children’s brains that happens at this time. 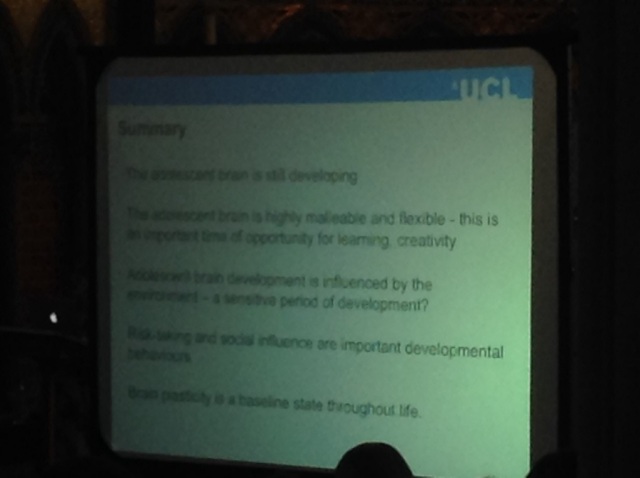 Terrible picture of the summary, sorry.

This entry was posted in edfest. Bookmark the permalink.