Kevin works at Canons High School in Edgware. His session is called the Trojan Mouse story.

He begins with the Gruffalo as an allegory. The mouse is the teacher, strolling through a big dark wood, which is their work. They’re threatened by a fox, aka political class; a snake, aka Ofsted, which has a particular impact on leadership teams; and an owl, aka SLT, who threaten with things like initiative overload and C-grade chasing. The biggest threat is the Gruffalo: teacher autonomy. It can be a blessing or a curse. Teachers need to be empowered and autonomous… 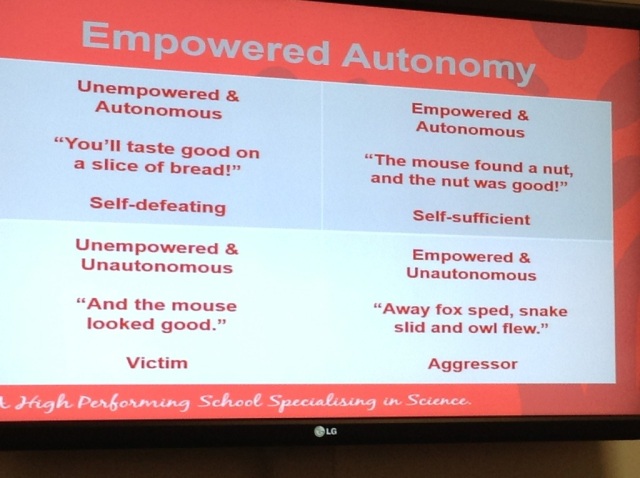 Kevin then shares the journey from his school towards making teachers autonomous and empowered. The Ofsted in 2010 was outstanding, with 1s in all categories except teaching and learning, which put them right in Wilshaw’s sights. Ofsted said they needed to raise attainment and improve progress by increasing the amount of inspirational teaching that challenges and engages all students.

They decided to do it by enthusing people about pedagogy – they wanted to make it contagious. They wanted to change the culture so that it didn’t feel Ofsted was the key driver, and they wanted to create an in-house pedagogy based on some solid underpinning principles.
Bottom up.
Classroom focused.
Organic and agile – which can make it scary because there’s no clear plan.
Surplus model – audits to find out what’s good and where the best practice is. Kev thinks this one might have had the biggest impact on the teachers.

They began with a core voluntary pedagogy group. These people would work on what they chose on a project to to introduce in the following academic year. This ran for two years, and then some money arrived to build teaching school capacity which they invested in pedagogy leaders. It was a bursary, available to everybody, for people to be responsible for pedagogy. It was a project management role rather than a TLR.

Somebody asks about getting the curmudgeons on board. Kevin says that there were 20 applications out of 60 teachers. Two step application – a sheet of A4 laying out vision for the school, and an outstanding lesson judgement, though this one is being reviewed. Somebody else asks if it would work in a hierarchical environment and Kevin says, probably yes, it worked in his.

The ped leaders ran a teaching and learning community in an area of strength that they had referenced in their application. Teachers were able to choose their own TLC to go along to. Ped leaders meet with SLT to keep them in the loop. There was no time allowance, but chunks of time were offered as necessary. The bursary was for 4 terms and had an equivalent to a TLR 2a. The second cohort are not all the same but the original team are still in the school who act as ambassadors for the scheme. Aspiring ped leaders make an effort to get involved in more whole school things to strengthen their application.

The first thing they had to do was a CPD day on accelerated learning, which attracted some really positive feedback. This feedback, over time, has become richer and more critical as necessary, which has provided opportunities for the ped team to adjust their plans. Recent inset involved a variety of sessions that staff opted into, and the latest inset day had sessions run almost entirely by non-ped leaders – clearly bottom up.

Ped leaders then ran a student pedagogy day, although this was the least successful thing that they’d done. (This might work quite well with sixth form: sessions on note taking, wider reading etc, to build on what we did on y12 induction day).

The impact on the school has been hugely positive. Other schools are adopting the model and reading/viewing the Canons Broadside; there’s a coaching culture and peer support; a pedagogy directory, based on teacher strengths; teaching and learning has improved, as validated by Ofsted: 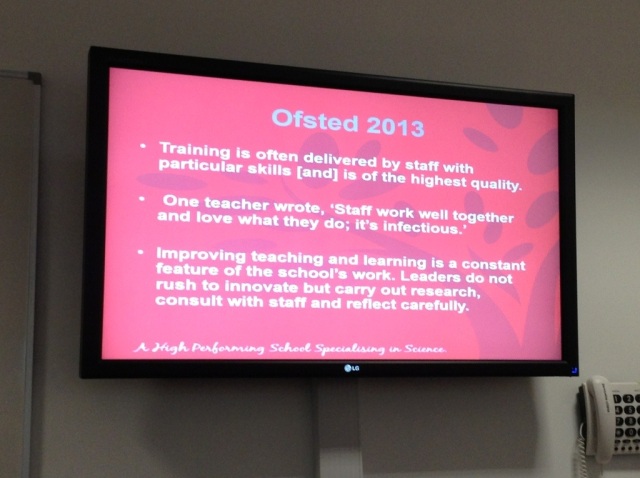 Also results have improved hugely, especially at sixth form – and it’s not an exam factory model.

Kevin uses paper mâché as a metaphor: Canons provides the wire frame in the middle for staff to lay their own strips on top. The ped leaders have taken it further than he ever thought they could.

This entry was posted in tlt13. Bookmark the permalink.