Learning on the Loo

I mentioned in my to-do list for this year that Learning on the Loo was something I really wanted to get off the ground, since it was on my to-do list last year and I never got round to it. Pinched, as all the best ideas are, it simply involves creating an information sheet about something or other and putting it on the wall in the toilets for people to read whilst they are answering the call of nature. They had it on the toilet walls at the Google HQ when I visited in 2010 (though not, I was sorry to see, in 2011).

I was a bit subversive with this to begin with: I just did it. We had a new photocopier which had the capability to scan and so I created a how-to sheet and stuck it up. It was fun to watch people buzzing with it a bit because not many people knew it was me. My aim was to replace them every fortnight but, naturally, this turned out to be a bit ambitious and I have settled for creating new ones when the inspiration strikes. 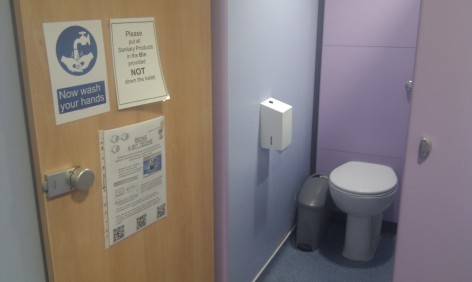 (Just realised we have lavender for the ladies and blue for the gents. #cliche)

The latest edition is to encourage staff to hand out more rewards to students, at the request of the lovely Cara, who launched the new reward raffle tickets this year. The last one was a follow-up to a Teaching and Learning breakfast at which the head of IT had shared Blabberize and Commoncraft. Quite a few of these got stolen out of their plastic wallets which I was flattered by. I think that definitely suggests they are having an impact; and one of our governors commented on how much he liked them at a meeting last term, which was nice feedback too.

It’s very low tech but a nice way of sharing. I have uploaded my LOTLs for you to have a closer look at, with two comments from me: firstly, number 3 is deliberately missing because it had identifiable student work on it; and in number 2, my arrow was actually stuck in the moon on the real thing, and not coasting ironically along the bottom. I think it was lost in translation when I opened the file in OpenOffice. C’est la vie.

This entry was posted in wins. Bookmark the permalink.

2 Responses to Learning on the Loo