Watkin is taking about what makes good learning in History. He starts with some video clips of students sharing their knowledge. J knows loads and loads, but his written work isn’t good. R can structure a really good written answer but she doesn’t have that knowledge and framework. A has all the right bits, but it doesn’t seem to work – the written work doesn’t come out quite right: “broken clocks” who have all the right pieces but can’t assemble. And then L, whose literacy issues make history almost impossible.

They also have monster questions that last for the whole year, which seems similar to the long survey units we’ve been working on in year 7 and 8. His big question for the Middle Ages is, if the Renaissance was a rebirth of Ancient ideas, was the Middle Ages a complete waste of time? Love this.

Secondly – keeping knowledge alive. This involves a lot of long term planning, connecting up different bits of knowledge through the course: marine corps knowledge – leave no topic behind. Neal has activities scattered around every so often, and when he says “Gorilla history” they have to grab an activity and do it. These are all short tasks that relate back to previous topics. Younger kids love it but GCSE students hate it because they think it interrupts their flow of learning. Neal has shared some of the research behind it with them to convince them that, thought counter intuitive, it is valuable. 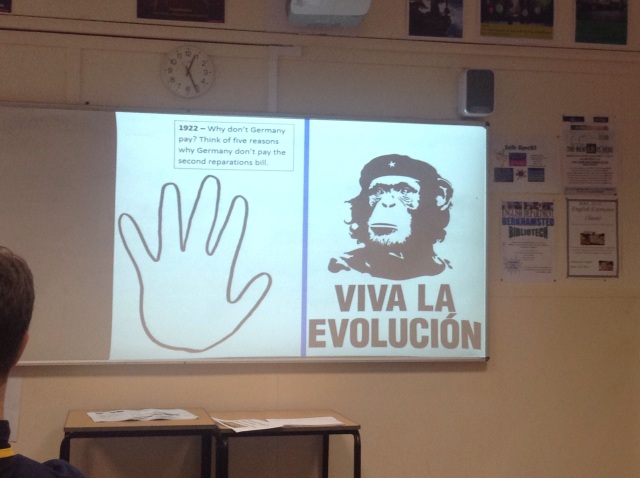 Something else they use is a random epic poem plot line generator, which he made subject specific to Saxon leadership. This uses a dice to help students work through the poem lines. He refers back to it later on when they look at Harold preparing for the Battle of Hastings, creating an extra layer of context to help students understand the impact of Saxon culture.

Big history map: Neal thought about how to create the monster historian, and subject knowledge is at the core of it, with things like historiography and source skills hanging off this. He gives them a couple of different historians’ accounts on a timeline – traditional and modern – and has students consider how those historians came up with their opinions, showing that different evidence leads to different outcome. Students then predict what the opinions will be at the same times for a different question.

This helps with big history mapping.

Neal is also trying to do the same with skills.

Neal reminds us of the TOWER model, that I have been using to a greater or lesser degree, with much success, since TLAB13. We have a go at an argument tunnel for the walk part, which I have used for TOWER writing before, but haven’t used for far too long! It is fun to have a go at this myself. Resolving to do this again across at least ks3 by the end of the year.

We do some analogy analysis, which is about getting students to create an analogy for various things they are studying.

It is remarkably difficult to think of an analogy for good history! We start by thinking about what the topic is actually about in order to come up with a reasonable analogy, but time runs out too quickly for us to come up with much.

This entry was posted in CPD Notes, tlab15. Bookmark the permalink.